The Process of Faith 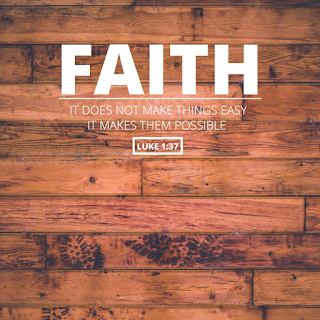 I've encountered a lot of people over the years who struggle with the concept of faith.

It is such a struggle in our minds sometimes because we think in terms of logic when it comes to our faith. But much to do with faith defies logic. Consider most of the examples in the Bible and you see that logic doesn't really play into it at all:

These examples, and many more, on their surface, seem larger than life. They are incredible. And to many people, they seem like the kinds of stories that are impossible to achieve unless you are a specific class of person. Spiritual Giants do great things, we think. Normal people don't.

But when you drill down into the stories, you see the common element of working faith in each story, and any other you find like it in scripture, is really very simple.

I've taught for years in my church that 'faith is movement. It's the concrete steps someone takes in knowing, relating to, and living for God.'

Think about each above example again:

You see, my friends, faith isn't a mental exercise. It's an ACTION based on a belief. James 2:17 (NKJV) tells us that "faith by itself, if it does not have works (the CORRESPONDING ACTION is the meaning of the word here in the original Greek Language) is dead."

In other words, your thinking about and logically rationalizing something won't really produce much change.

For instance, my house has 3 levels: a basement, where I have an office, a main living floor, and an upstairs with bedrooms. I can be in my basement working late and believe it is time to go to bed. I can believe my pillow and blankets and awesome mattress will give me a good nights sleep. I can desire them and get mentally prepared for sleep, believing fully that it's what is best for me and that I am ready to experience sleep.

But I have to walk up the stairs to get there.

If I know the stairs can get me to my destination, that's belief. Belief is important. You are directionless without belief.
But faith is the fusion of my belief with my action!

In order to obtain what I want (a good nights sleep) I have to believe its possible, believe its available, and believe it is for me... and then I have to do something and walk up the stairs to get it!

So, here's my challenge for you and I today: Don't just believe something. That will help you mentally and emotionally, but it won't bring much actual change. Do something. Take a step. Make a move. Put action to your belief (based on God's Word!) and then see change!

Popular posts from this blog

Well, there are many factors, including your credit worthiness and the interest rate set by the Federal Reserve.

The Khan Academy however, has produced a fantastic video that breaks everything down simply and makes it easier to understand.

5 Fights Couples Have When Buying a House

October 02, 2018
When my wife and I bought our home in the Northern Kentucky area, it was quite an experience. We had a great Realtor® with whom I am now privileged to work. I can only imagine the things he must have thought about us, showing up to look at houses with our two young boys, talking about if a room was big enough...what was that smell...why would they put the switch over here...

Ah, those were the days!

Thankfully, we didn't actually fight (that I remember) about anything considering a house. We both had a concept together of what we wanted, and a price range. And outside of those things, I didn't care as long as she was happy. No really, I didn't! As long as I could have air conditioning and hot water, I was good!

However, that is not the experience everyone has.

Today, I am actually going to share a link that will take you to Realtor.com. The article was written earlier this year by Stephanie Barth, a writer, and contributor to several publications. She took this concept of…
Post a Comment
Read more

November 10, 2010
There are MANY things that can be used in Children's Ministry. Even at home in a family setting, it can be overwhelming to decide what material you use, what devotion book, or even what worship resource. So, in an effort to provide you with some usable resources, I would like to offer my top 10 Children's Ministry resources. No company has paid for this endorsement in any way, these are just resources I have used in ministry and think would be helpful, either for other Children's Ministry folks, or parents at home!

10-Veggie Tales
These wonderful CGI creations sing, dance, do comedy, and provide great lessons in character that kids young and old enjoy. While the songs can be very annoying for adults, we understand that using Veggie Tales isn't about our likes, its about conveying spiritual truth to kids in a way they understand and can get it. And I also have been pleasantly surprised by the newest releases, which have been copies of classic tales (Sweet Pea Beauty…
Post a Comment
Read more