My Deal With Drains


Last year my wife and I noticed that the drain in our kitchen was starting to get very slow. Over time, despite cleaning it out and running extra hot water, it reached the point of being completely clogged. Eventually, we had to call not one, but two plumbers to get the issue totally fixed, because it turned out we had a level 5.

The stuff coming out of our drain pipe literally looked just like the stuff in this picture: 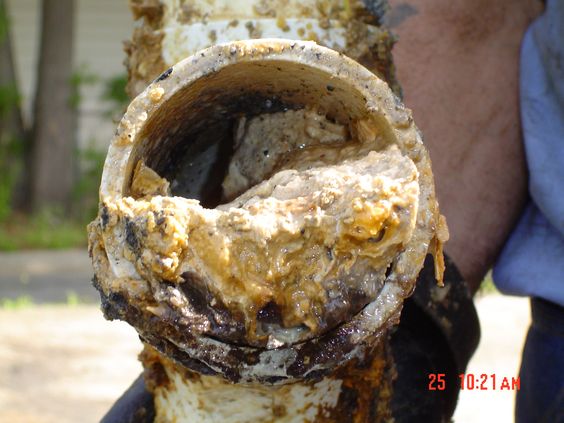 And I won't even tell you how vile it smelled. Thank the Good Lord for my wife's stash of essential oils and multiple diffusers!

Now, our problem was pretty serious, and one that had been building up (literally) for decades. Long before we moved into the house this issue existed down the drain (HA!). And the first plumber who used his auger really was a big help in giving us an understanding of what was happening and getting us on the path to clear pipes.

Unfortunately, he couldn't do all the work in one day, so we had him slated to come back. The next day before making it back, he broke his foot and called me, explaining what I had so I could find someone else to finish the job.

In comes plumber number 2. He listened to me. He examined things himself. And then he gave me two options. He said, indeed, he could continue the same line of treatment we had started, and it would be expensive, messy, and smelly.

Or, he said, if we were patient and willing to give it time to work, we could try a product that contained enzymes that would eat the grease.

I was initially skeptical, because I thought he was trying to sell me some hyped up Liquid Plumber. But when I shared his observations with my wife she looked at me and said something unexpected:
"Why didn't I think of that?"

Well, dear, you're not a plumber...that was my thought. But she does have a degree in chemistry and worked for a Bio Chemical company while in college. Her work, specifically, was in a research department using enzymes!

So, we bought the stuff after she read the ingredients and he explained the process. We were told, don't expect to see much happen the first day or two, because of how bad the clog was. After six days, I was starting to have doubts. But we continued our chosen course of treatment, using this special enzyme mixture, followed by a stock pot of boiling water down the drain.

Then...one afternoon... it was like the flood gates broke open and everything was clear. It really worked!


Now, I am not a plumber. I am not telling you that you need to do what I did. But here's what I know:

So... if you have issues with drainage, first try checking yourself. Get a Zip It (or similar device) and follow the directions. Many clogs are close to the drain and some, like bathroom drains, can be cleared fairly easily in most cases.

If that doesn't work, by all means get an opinion and estimate. I would say NEVER pay for an estimate, and if you are uncomfortable with the price thank them and tell them you're getting another one and will call them if you want their service.

But beyond this, ask a professional about maintenance and treatment. Listen to what they say. See if, as my plumber did, they have something that can help that might involve a slower process, but be far less expensive and provide the same end result.

For us, the $70 I spent on that bottle of enzyme solution was money well spent. There were even directions for maintenance to help keep the pipes clean going forward, and I intend to follow those directions.

I'll do this because I see it as an investment in the functioning of my home.

Popular posts from this blog

Well, there are many factors, including your credit worthiness and the interest rate set by the Federal Reserve.

The Khan Academy however, has produced a fantastic video that breaks everything down simply and makes it easier to understand.

5 Fights Couples Have When Buying a House

October 02, 2018
When my wife and I bought our home in the Northern Kentucky area, it was quite an experience. We had a great Realtor® with whom I am now privileged to work. I can only imagine the things he must have thought about us, showing up to look at houses with our two young boys, talking about if a room was big enough...what was that smell...why would they put the switch over here...

Ah, those were the days!

Thankfully, we didn't actually fight (that I remember) about anything considering a house. We both had a concept together of what we wanted, and a price range. And outside of those things, I didn't care as long as she was happy. No really, I didn't! As long as I could have air conditioning and hot water, I was good!

However, that is not the experience everyone has.

Today, I am actually going to share a link that will take you to Realtor.com. The article was written earlier this year by Stephanie Barth, a writer, and contributor to several publications. She took this concept of…
Post a Comment
Read more

November 10, 2010
There are MANY things that can be used in Children's Ministry. Even at home in a family setting, it can be overwhelming to decide what material you use, what devotion book, or even what worship resource. So, in an effort to provide you with some usable resources, I would like to offer my top 10 Children's Ministry resources. No company has paid for this endorsement in any way, these are just resources I have used in ministry and think would be helpful, either for other Children's Ministry folks, or parents at home!

10-Veggie Tales
These wonderful CGI creations sing, dance, do comedy, and provide great lessons in character that kids young and old enjoy. While the songs can be very annoying for adults, we understand that using Veggie Tales isn't about our likes, its about conveying spiritual truth to kids in a way they understand and can get it. And I also have been pleasantly surprised by the newest releases, which have been copies of classic tales (Sweet Pea Beauty…
Post a Comment
Read more